On 10 and 11 October, the “Amyloid imaging to Prevent Alzheimer’s disease” (AMYPAD) consortium gathered for its General Assembly meeting in Barcelona, Spain. The meeting provided a chance to gather everyone who work on the AMYPAD project to discuss progress and future activities. The General Assembly meeting commenced with Frederik Barkhof (VUmc) and Gill Farrar (GE Healthcare) welcoming more than 80 attendees (exceeding any of our past General Assembly meetings). It was great to hear the progress, milestones and major achievements achieved during the third year of the project.

The first day placed the emphasis squarely on the two AMYPAD sub-studies. A first session was dedicated to the Diagnostic and Patient Management Study (DPMS) including its aims, endpoints, study design, recruitment status and analysis plan. As initially planned, eight European sites received the approval for the diagnostic study and are now active and running (Geneva, Amsterdam, Toulouse, Barcelona, Cologne, London, Lausanne and Stockholm). The DPMS has reached the 50% recruitment mark with over 500 research participants recruited and over 300 amyloid PET scans performed, since the study was initiated in April 2018. After that, a session was dedicated to the Prognostic and Natural History Study (PNHS) including its design, objectives and study status. Five Wave-1 sites received approvals and are actively recruiting (Amsterdam, Edinburgh, Barcelona, Geneva and Toulouse). Karolinska Institute in Stockholm has also received approvals and the recruitment is expected to start soon. In parallel, several Wave-2 sites, with the majority aligned with the EPAD study, have received approvals and have initiated their activation process. Considerable progress has also been made in the identification and inclusion of non-EPAD cohorts as parent cohorts for the PNHS. The next months will see additional sites and cohorts coming on board. As of 14th October 2019, 548 subjects have been informed of which 310 consented. A total of 231 participants have been scanned so far. It was valuable to the centers that are preparing to open to hear some tips and tricks on study coordination and recruitment strategies.

Analysis of the data acquired in both studies has also started. The first and preliminary results were presented including the process for data harmonisation and request. A keynote lecture was then delivered on the Alzheimer’s disease drug development pipeline. Andrew Stephens (Life Molecular Imaging) gave a comprehensive overview of the recent clinical trial failures and agents currently being developed for the treatment of Alzheimer’s disease. This presentation sparked some interesting discussions and was a captivating end to an overall fascinating day.

On the second day, the AMYPAD consortium gathered for a scientific session giving the stage to nine AMYPAD researchers to showcase their work. It was a great opportunity to initiate collaborations between partners and to get input from delegates. There was also sessions on the AMYPAD budget, sustainability, ethics and communication activities. Before the wrap-up session, the new IMI NEURONET project was presented along with the opportunities for AMYPAD. Gill Farrar and Frederik Barkhof then recapitulated the meeting’s discussions after which the meeting ended.

It was an interactive and invigorating general assembly meeting with a lot of discussions. The team is looking forward to the next months ahead! 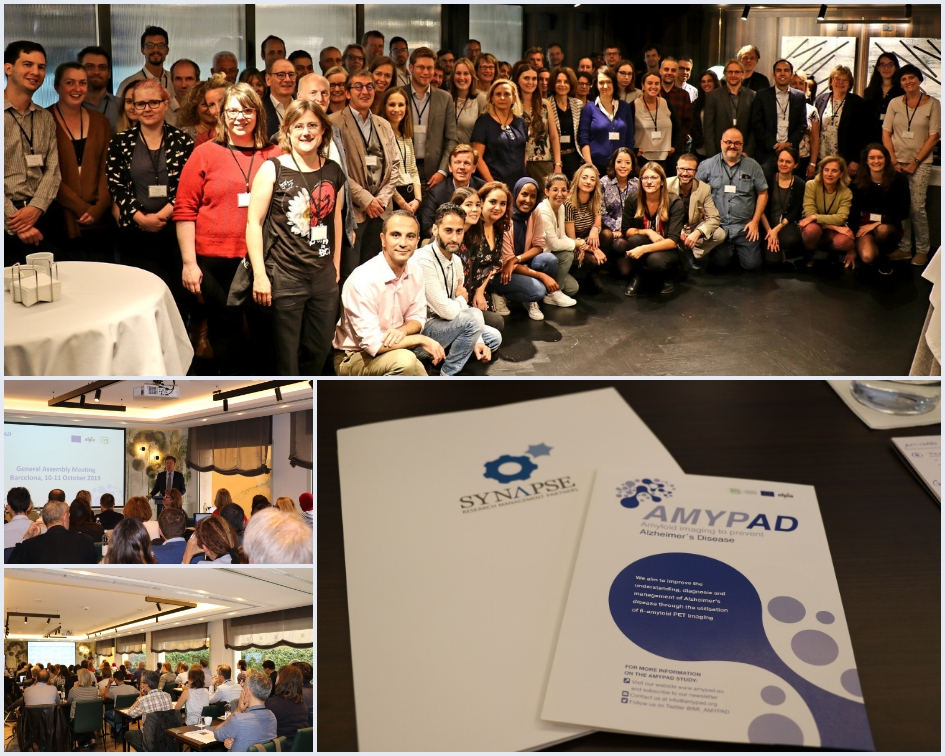