The 14th​ International Conference on Alzheimer’s and Parkinson’s Diseases (AD/PD 2019) and related neurological disorders took place in Lisbon (Portugal) from 26-31 March. It provided a world class platform for international clinical investigators and scientists to present, discuss and trade expertise on a broad range of themes and topics. The event attracted over 3,800 participants from over 70 countries.

The conference started on 26 March with three pre-conference workshops:

The scientific director of the Alzheimer’s Prevention Program of the Barcelonaβeta Brain Research Center(BBRC), Dr José Luis Molinuevo, was invited to give a talk at the preconference meeting and asked to present  the European Prevention of Alzheimer’s Dementia (EPAD) project and the Amyloid Imaging to Prevent Alzheimer’s Disease (AMYPAD) project. He participated in a session about Key Real-World-Evidence initiatives in Alzheimer’s disease chaired by Colin Masters.

In his talk, Dr Molinuevo gave an overview of the EPAD project. He started by introducing the EPAD project, its consortium and objectives. He further explained the Longitudinal Cohort Study (LCS) and highlighted the number of European participating countries. By end March 2019, there were 21 study sites up and running, with more than 1,500 research participants recruited. He also mentioned the data collected within the study and ended with the main achievements of the EPAD project.

Then, Dr Molinuevo presented the AMYPAD project aiming to improve the understanding, diagnosis and management of Alzheimer’s disease through the utilisation of ß-amyloid PET imaging. He mentioned the AMYPAD consortium which is a combination of 9 academic partners, 3 industrial partners, 2 SMEs and 1 patient organisation. He explained the Diagnostic and Patient Management Study (DMPS) and the Prognostic and Natural History Study (PNHS) including their objectives, design and current status. As per 29 March 2019, the DMPS is performed in Geneva, Amsterdam, Toulouse, Cologne, Barcelona and London with 244 patients spread on the active sites. The PNHS has three active sites (Amsterdam, Edinburgh, and Barcelona) with 86 research participants. 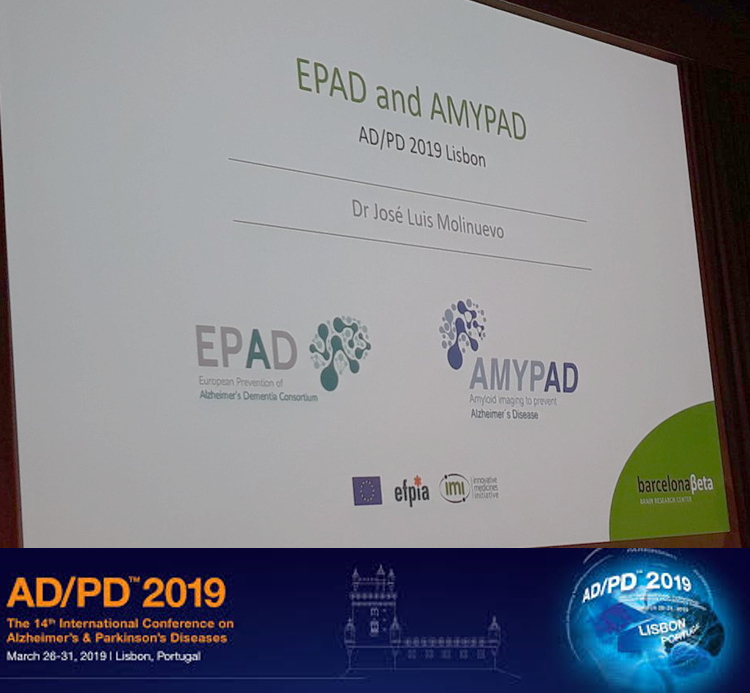