The International Conference on Alzheimer’s disease and Parkinson’s disease and related neurological disorders (AD/PD™) is a unique conference that provides a world class platform for clinical investigators and basic scientists to present, discuss and trade expertise on a broad range of themes and topics, AD/PD™ has gone from strength to strength attracting over 3,800 participants from 75 countries and over 2,200 abstracts.

At the 15th international virtual AD/PD™ conference held on 9-14 March, Gemma Salvadó, PhD student at Barcelona Beta Brain Research Center (BBRC), gave an oral presentation entitled ‘’Visual assessment of [18F]flutemetamol PET images can detect early amyloid pathology and grade its extent”. This work conducted within the AMYPAD project by Gemma and Lyduine Collij (VUmc) has received the Junior Faculty Award from the organizing committee of the AD/PD conference. Congratulations to both Gemma and Lyduine!

If you missed the above presentation, please note that all presentations are available to registered participants until 14 June.

This study has recently been published in the European Journal of Nuclear Medicine and Molecular Imaging, you can find more information and the full results here.

You can read the abstract of the oral presentation below:

Aims: Visual read (VR) guidelines of amyloid-β PET were developed to capture established pathology in clinical populations, whereas quantification is often used to detect early pathology in research settings. This study investigated the sensitivity of VR to detect early amyloid-β pathology as determined quantitatively, and studied the utility of regional uptake patterns to track progression.

Methods: [18F]flutemetamol PET images of 497 subjects (ALFA+ N=352;ADC N=145) were included, covering both subthreshold and established amyloid pathology. Scans were visually assessed according to product guidelines, recording the number of positive regions (0-5) and a final negative/positive classification. All scans were quantified using the standard Centiloid (CL) method. The agreement between VR-based classification and previously published CL-based cut-offs for early (CL=12) and established (CL=30) pathology was determined. An optimal CL cut-off maximizing sensitivity and specificity (Youden’s index) against VR was derived. The quantitative burden of observed regional patterns was determined and operationalized into 3 stages of VR positivity.

Conclusions: Our results show that VR is an appropriate method for assessing early amyloid pathology and grading the extent of visual amyloid positivity, which could be valuable to stratify patients.

Mark your agenda for next year! The 16th​ International Conference on Alzheimer’s and Parkinson’s Diseases and related neurological disorders, AD/PD™ 2022, will be held from March 15-20 in Barcelona (Spain). 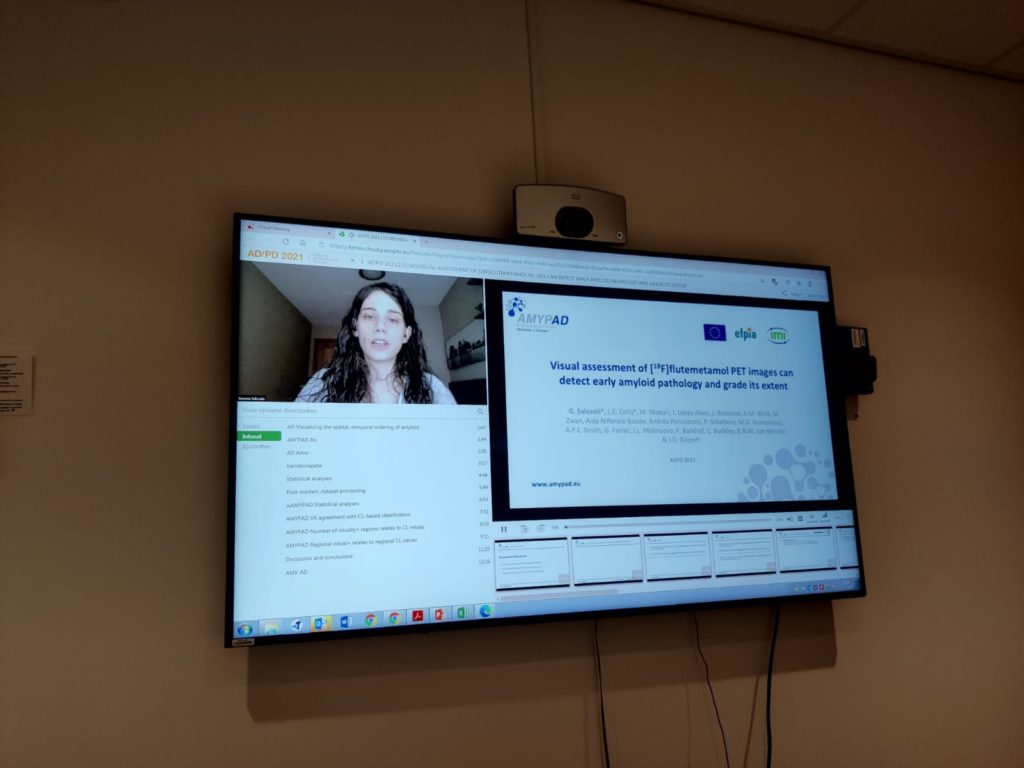