The Alavi-Mandell Award is given to individuals who are the first author of excellent papers published in the Journal of Nuclear Medicine and who provide added value to the field. The aim of the award is to motivate young scientists to grow in the field of nuclear medicine.

The article for which Lyduine received recognition was conducted within the AMYPAD project. The purpose of this publication was to compare two parametric imaging methods to determine the optimal approach for assessment of early amyloid pathology. To this end, researchers used the data from amyloid PET scans of cognitively normal elderly volunteers collected in the EMIF project, specifically from the Twin study conducted at the VUmc.

“The award came as an absolute surprise! I am very happy and humbled to receive this award for my first paper within my PhD, which incorporates a lot of aspects of the AMYPAD consortium; collaboration with other cohorts, comparing static and dynamic amyloid PET scans, and focus on cognitively normal subjects’. This award aims to motivate young researchers to continue in the field of nuclear medicine, and I would say ‘mission accomplished’!’”, said Lyduine.

Lyduine Collij received the Alavi-Mandell Publication Award of the Society of Nuclear Medicine and Molecular Imaging for the following paper:

Abstract:
Objective: Determine the optimal approach for assessing amyloid pathology in a cognitively normal elderly population.
Methods: Dynamic 18F-Flutemetamol PET scans acquired using a coffee-break protocol (0-30 and 90110 min. scan) from 190 cognitively normal elderly (mean age 70.4 years, 60% female) were included. Parametric images were generated from standard uptake value ratio (SUVr) and non-displaceable binding potential (BPND) methods, with cerebellar grey matter as a reference region and were visually assessed by three trained readers. Inter-reader agreement was calculated using Kappa statistics and (semi)quantitative values were obtained. Global cut-offs were calculated for both SUVr and BPND using a ROC analysis and the Youden Index. Visual assessment was related to (semi-)quantitative classifications.
Results: Inter-reader agreement in visual assessment was moderate for SUVr (κ = 0.57) and good for BPND images (κ = 0.77). There was discordance between readers for 35 cases (18%) using SUVr and for 15 cases (8%) using BPND, with 9 overlapping cases. For the total cohort, the mean (±SD) SUVr and BPND values were 1.33 (± 0.21) and 0.16 (± 0.12), respectively. Most of the 35 cases (91%) where SUVr image assessment was discordant between readers, were classified as negative based on (semi-) quantitative measurements.
Conclusion: The use of parametric BPND images for visual assessment of 18F-Flutemetamol in a population with low amyloid burden improves inter-reader agreement. Implementing semi-quantification in addition to visual assessment of SUVr images can reduce false-positive classification in this population 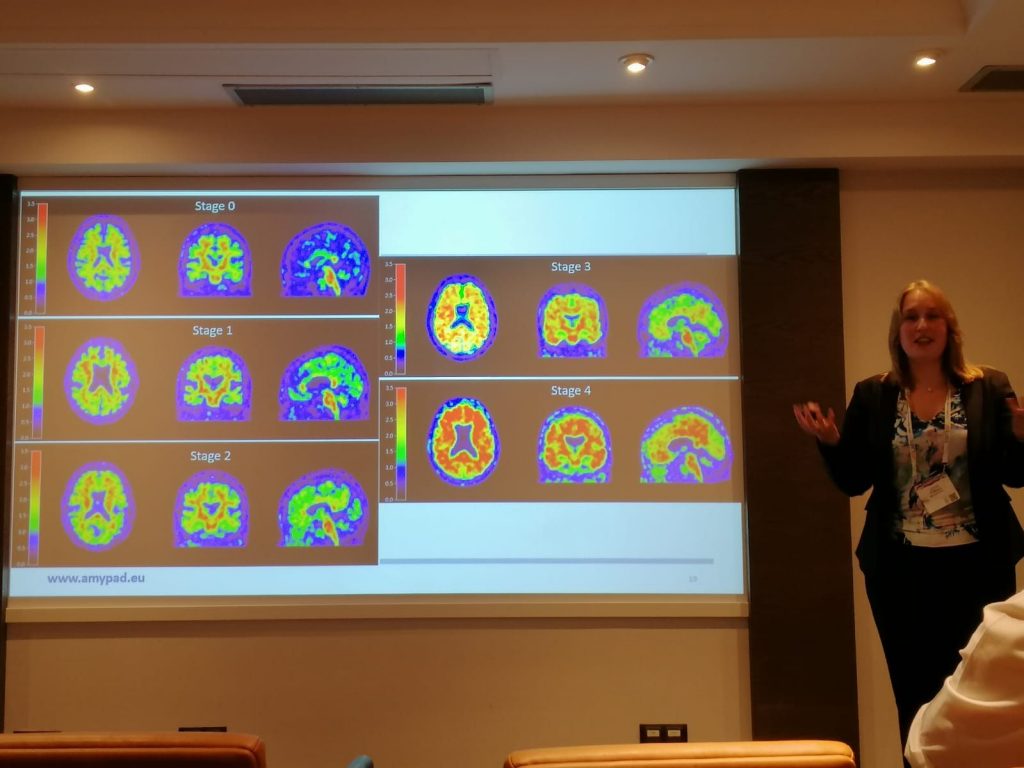