A new paper entitled “Test-Retest Variability of Relative Tracer Delivery Rate as Measured by [11C]PiB” has recently been published in the journal Molecular Imaging and Biology. The purpose of the present retrospective analysis of a previously reported test-retest (TRT) [11C]PiB study was to assess the precision of [11C]PiB R1. This work received funding from the EMIF and AMYPAD projects.

Purpose: Moderate-to-high correlations have been reported between the [11C]PiB PET-derived relative tracer delivery rate R1 and relative CBF as measured using [15O]H2O PET, supporting its use as a proxy of relative CBF. As longitudinal PET studies become more common for measuring treatment efficacy or disease progression, it is important to know the intrinsic variability of R1. The purpose of the present study was to determine this through a retrospective data analysis.

You can read the paper here. 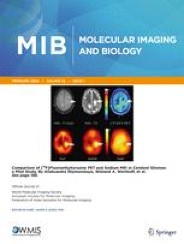