The WP2 “Tracer delivery, PET scanning and image analysis” is led by Juan Domingo Gispert (BarcelonaBeta Brain Research Center) and Chris Buckley (GE Healthcare). This part of the AMYPAD work is dealing with the design and implementation of the optimal image analysis methods for AMYPAD objectives and future clinical application of amyloid imaging. Determination of the optimal methodology for amyloid PET analysis and standardization of results across available tracers is crucial for harmonization across cohorts and multi-centric studies.

WP2 is performing the analysis and quality controls of all the scans being acquired in AMYPAD. GE is analyzing the scans in the DPMS with a PET-only pipeline and IXICO those of the PNHS with an MRI-based pipeline. Both pipelines render quantitative measures of amyloid load using the Centiloid approach to facilitate a direct comparison of quantification outcomes over different tracers and with respect other studies. Preliminary results have been presented at the last AMYPAD General Assembly meeting and to international conferences (e.g. HAI, AAIC). Several tests to verify the quantitative comparability of CL values across tracers have been designed and are underway.

During the past couple of months, the VUmc team has been working on the processing of the dynamic PET scans acquired in the AMYPAD Prognostic Study. So far, ±85 scans from four different centres have been transferred from IXICO to the VUmc. The VUmc team has devoted much time and effort to setting up the quality control (QC) procedure, the (pre-)processing pipeline and validating the pipeline for scans from each of the centres. Currently, they are performing a QC on the output from the processing pipeline and the next step will be quantification. Unfortunately, the current COVID-19 situation is complicating the transfer of new scans.

IXICO is performing SUVR analysis on the standard PET acquisitions. They have received 291 datasets so far, and all have passed their initial metadata checks to proceed to SUVR analysis. All datasets, except 28 which are currently missing an MRI at the same timepoint as the PET, have been processed, and all have been through their endpoint quality checks, in which the target and reference regions are visually reviewed. For the primary endpoint of GAAIN global cortical average with respect to the whole cerebellum, 95% of datasets pass the endpoint quality checks, pending their final internal review. The recent refinement to the white matter reference region has brought the endpoint QC pass rate for this region up from approximately 50% to 98%.

In addition, WP2 has established a collaboration with Dr. Sang Won Seo (Department of Neurology, Samsung Medical Center, Seoul, South Korea). Dr. Seo`s group has been working on a head to head comparison study for both tracers used in AMYPAD, namely, [18F]-florbetaben (FBB) and [18F]-flutemetamol (FMM).

The WP2 has created a task force; Centiloid Working Group, involving the following AMYPAD partners: GE, Life, VUmc, BBRC, and IXICO. The team received the data from Dr. Seo’s group that acquired a group of participants with both FBB and FMM tracers. With this data, they are studying the tracer comparability on the same subjects using the Centiloid units, aiming to understand the limitations of the Centiloid approach and the way to improve it. So far, they have been able to evaluate the AMYPAD quantification pipelines and observed good consistency among the AMYPAD pipelines’ outcomes. Also, the WP2 team is trying to understand and compare tracers’ retention pattern as well as resolving additional issues they have encountered.

The WP2 leads Juan Domingo and Chris talked to us about their work on the project.

WP2 is dealing with all technical and logistic operations needed to support both PNHS and DPMS. This includes tracer production and distribution, setting-up of the clinical imaging network, and further development of image acquisition, QC and quantification protocols.

Previously we have developed operation manuals for image acquisition and other site-specific methodology including instructions for image transfer; deployed AMYPAD image database and developed a technical solution for data sharing beyond AMYPAD’s partners. Until January 2020, we have quantified PET images from the first consecutive 122 subjects from PNHS, and the first consecutive 222 from the DPMS study using the AMYPAD quantification pipelines (visual reads SUVR, Centiloid, BPnd).

Currently, we are investing the efforts to determinate standardized methods of image analysis for scans across tracers, quality control, and refinement of amyloid quantification methods. As we are also including the non-EPAD cohorts in the quantification, we came up with a new challenge about how to make all PET images acquired in different sites fairly comparable. To tackle this issue, the ‘Harmonization of AMYPAD PET Data’ project was initiated and an alliance has been formed with the accreditation body of the European Association of Nuclear Medicine (EANM): EANM Research Ltd (EARL).

The WP2 has contributed to the two papers recently published (“Quantitative amyloid PET in Alzheimer’s disease: the AMYPAD prognostic and natural history study”, and “Simulating the effect of cerebral blood flow changes on regional quantification of [18F]flutemetamol and [18F]florbetaben studies”). Another paper summarizing the methods implemented in AMYPAD is currently being drafted.

What has been the biggest challenge in your work so far?

Biggest effort has been to set up the tracer delivery and imaging networks along with all the infrastructure to capture the scans and associated data. WP2 has also developed optimal PET analysis methods to render quantitative outcomes for the two AMYPAD trials. Then, once data started to flow in, naturally some of these methods had to be slightly adjusted.

Just like everybody else, we have also faced the new COVID reality and the need to adjust our work. While across the AMYPAD consortium, the situation affected adversely different WPs and tasks, the ongoing tasks in WP2 were not severely affected. Still, during the first period, we needed to reorganize our work and put on hold a couple of immediate activities planned. For example, the validation of the Hoffman phantom harmonization process across AMYPAD sites has been postponed, while the travels in the EU are under restriction. 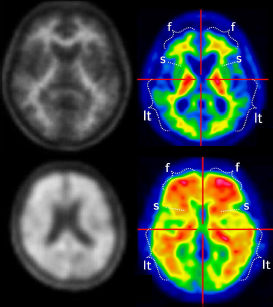